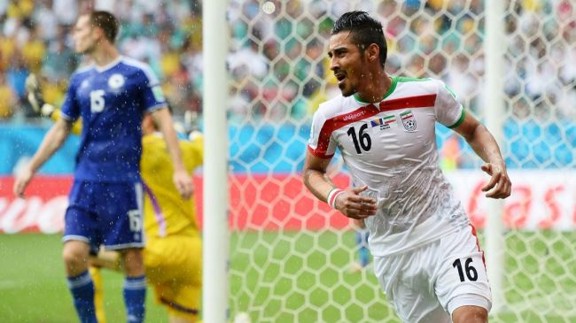 Iranian international striker Reza Ghoochannejad has reached an agreement to sign the Kuwaiti professional football club Kuwait Sporting Club on a one-year deal, and awaits a series of physical tests in order to officially complete his move.

The 26-year-old Dutch–Iranian footballer, who plays for English football club Charlton Athletic and Iran men’s national soccer team as a forward, joined the Kuwaiti side at its pre-season training camp in the Egyptian capital of Cairo on Tuesday evening.

The sum of the Iranian striker’s contract with Kuwait Sporting Club has not been disclosed yet.

He represented the Netherlands from 2003 to 2007, having played for the Dutch national under-19 football team.

Ghoochannejad  scored the winner in the 1–0 win against South Korea at Munsu Football Stadium in the city of Ulsan, situated about 410 kilometers (254 miles) southeast of South Korea’s capital Seoul, on June 18, 2013. The goal led to Iran’s qualification at the top of its group for the 2014 FIFA World Cup in Brazil.

Ghoochannejhad netted a consolation goal for Iran in the 82nd minute of his team’s final World Cup match against Bosnia and Herzegovina at the Arena Fonte Nova in Salvador on June 25.

Iran lost the Group F showdown 3-1 and its hopes to cruise into knockout stage of 2014 FIFA World Cup were dashed.

Ghoochannejad’s goal was Iran’s only at the prestigious soccer tournament in Brazil.