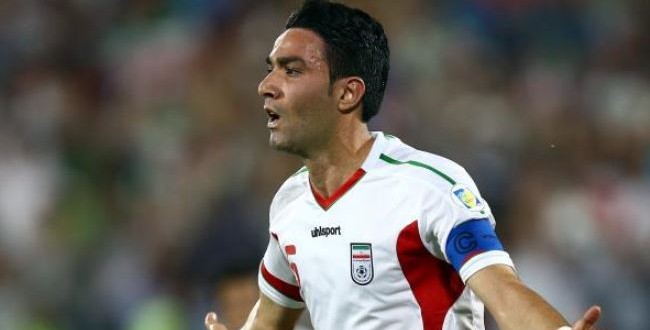 Veteran Osasuna midfielder Javad Nekounam will captain Iran’s national soccer team in the 2015 Asian Cup due to be held in Australia in January, the Asian Football Confederation (AFC) says.

The AFC reported that Iran’s national team head coach, Carlos Queiroz, has finalized names of the plays for the tournament which will run from January 9 to 31. The report further noted that the coach has named Nekounam as the captain of the squad and has called up 13 Iranian footballers that featured at the FIFA World Cup finals in Brazil in June. Alireza Haghighi, Khosro Heidari, Ehsan Hajisafi, Jalal Hosseini, Amirhossein Sadeghi, Javad Nekounam, Masoud Shojaei, Morteza Pouraliganji, Omid Ebrahimi, Karim Ansarifard, Vorya Ghafouri , Mohsen Foroozan Vahid Amiry, Andranik Teymourian, Ramin Rezaeian, Reza Ghoochannejhad, Soroush, Alireza Jahanbakhsh, Hashem Beikzadeh, Sardar Azmoun, Ashkan Dejagah, Alireza Beiranvand, Mehrdad Pooladi are the finalized names of the players on the Iranian squad that will feature in the 2015 Asian Cup.

The national outfit arrived in Sydney on December 30 and has been scheduled to train in the city’s Cromer Park until January 7. The team will then head to Melbourne to play in its opening match against Bahrain on January 11.

Iran, which is looking to win its fourth continental title, is drawn in group C of the tournament along with Qatar, the United Arab Emirates and Bahrain.