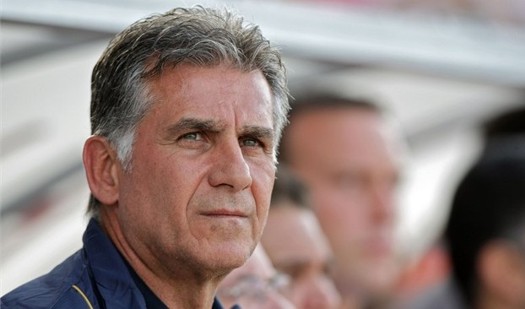 Iran’s Head coach in the 2014 World Cup said that he would be back in Iran to sign an extension to his contract as soon as the Football Federation President, Ali Kafashian, asks him.

“It depends on Kafashian’s decision. I’ll fly to Iran whenever he wants me back. It’s not in my hands to set the date for my return to Iran, I can’t tell you that,” Portuguese coach Carlos Queiroz told ISNA reporter.
“All terms and condition were discussed the last time I was in Iran, coming to an agreement with the federation not to change any part of the contract. Kafashian however, has sent me a draft of a contract containing new terms,” Queiroz added.
Iran will soon begin preparing for the 2015 AFC Asian Cup, which will be held in Australia from January 9 to 31, 2015.
Under the tutelage of Carlos Queiroz, the Iranian national football team played out a goalless draw against Nigeria, suffered a late 1-0 defeat against Argentina, and lost 3-1 to Bosnia and Herzegovina in Group F of the 2014 World Cup.
Soccer 2014-08-16
admin
Share !