A team of engineers from Harvard and Massachusetts Institute of Technology engineers have developed an affordable self-assembling robot.

The android is made of a sheet of composite paper, which has had different parts, including hinges, motors, batteries, and a microcontroller, installed upon it.

Having been fitted with the batteries, the automaton starts to assume its designated form and launch into function.

The technology drew upon the ancient Japanese art of origami and could eventually yield affordable ‘robotic helpers’ and come handy in space exploration.

“Getting a robot to assemble itself autonomously and actually perform a function has been a milestone we’ve been chasing for many years,” said Rob Wood of Harvard’s School of Engineering and Applied Sciences.

He said, “You would be able to come in, describe what you need in fairly basic terms, and come back an hour later to get your robotic helper.”

“Imagine a ream of dozens of robotic satellites sandwiched together so that they could be sent up to space and then assemble themselves remotely once they get there,” said Sam Felton, a Harvard Ph. D student who co-authored the research. “They could take images, collect data, and more.” 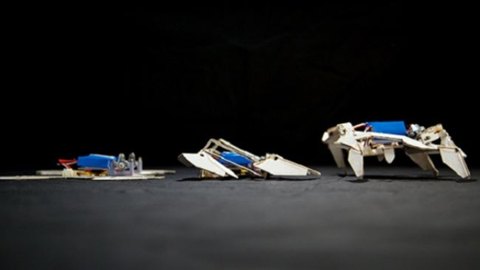