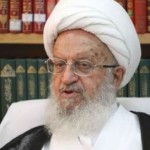 An Iranian Grand Ayatollah has said high speed internet is unethical and contrary to humanitarian principles, Iranian media sources reported on Tuesday. Ayatollah Makarem Shirazi, a prominent Shia scholar, made the remarks in response to a question put to him by cyber activists, via his website. Although Iran has the highest total number of internet users in the Middle East, ... END_OF_DOCUMENT_TOKEN_TO_BE_REPLACED