November 5, 2014 Comments Off on Christian Couple Are Tortured and Burned to Death in Pakistan 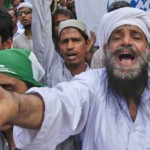 This horrifying event happened on Tuesday after the couple where accused of burning a Quran, police officials said. The incident took place in Kot Radha Kishan town, about 60 kilometres southwest of Lahore city. The victims, identified as Shama and Shehzad, were burned alive in a brick kiln where they used to work. Blasphemy is a highly sensitive issue in ... END_OF_DOCUMENT_TOKEN_TO_BE_REPLACED