Before the ceremony strains of opera classic Nessun Dorma by Puccini could be heard wafting across the lawns from speakers.  Waiting each side of the marriage arch were two female harpists dressed in silver outfits.  The ceremony itself was very brief but hugely joyous for all those attending. Donald Trump’s grandchildren were pages and bridesmaids.  Donald Jr sat next to long-term girlfriend Kimberly Guilfoyle in the front row, alongside brother Eric, who bucked the event’s trend of a black tie and chose white instead.  The former president maintained a composed expression as he walked Tiffany down the aisle – wearing a pink flower in his lapel.  After exchanging vows, the blissful couple joined guests for champagne and canapés by the pool before heading into the estate’s magnificent ballroom for the main reception. 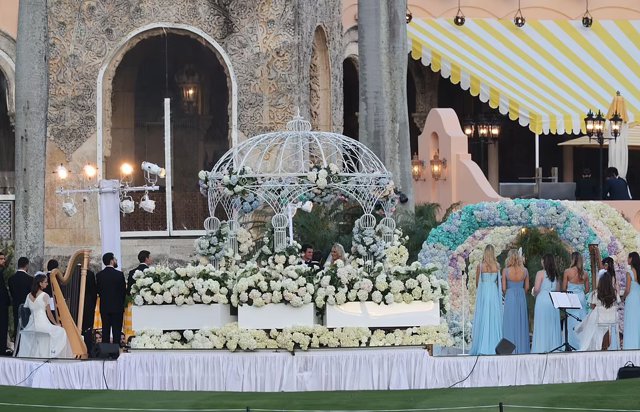